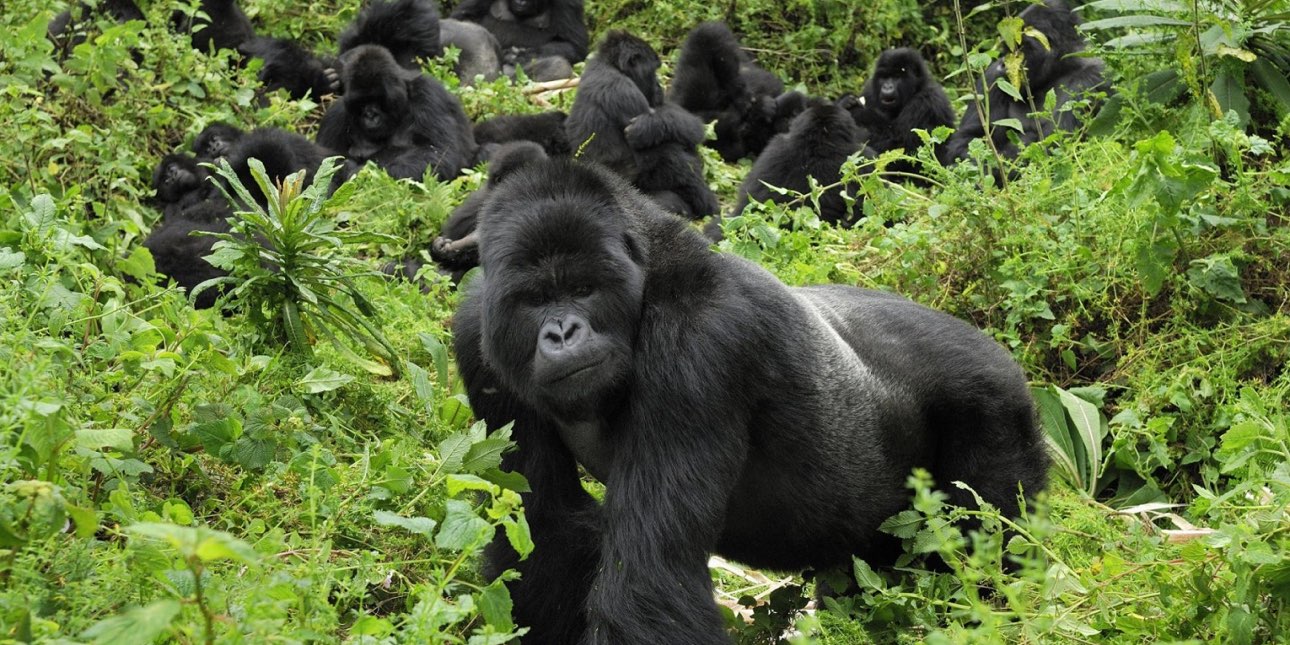 Arrival in Kigali International airport. After visa, customs & immigration procedures, where you will be requested your yellow fever vaccination card, you will collect your luggage and one of our guides will meet & greet you and transfer you SERENA HOTEL KIGALI to spend the night, where you will stay on bed and breakfast basis.

Rwanda, better known as The land of a thousand Hills, is a landlocked country located in the Great Lakes region in central-east Africa, bordering with Uganda, Burundi, Democratic Republic of Congo and Tanzania.

Even though the country is located close to the Equator, the weather is cool due to the altitude. The terrain consists of highlands covered by meadows and hilly landscapes due to the endless hills. There is plenty of game in Rwanda, including mountain gorillas, and Rwandans are really looking after their tourism attractions and starring a great economic and social recovery.

Years after the 1994 genocide, in 2009, a documentary by CNN considered Rwanda the most successful story in Africa, with its achieved stability, economic growth and International integration.

Depart to Butare, known as the “university capital town” of the country, because the National University of Rwanda is located there, a bilingual city (English and French), which hosts as well the prestigious Nyakibanda Seminar, the Rwandan National Institute of Scientific Research, the Ruhande Arboretum and a Cathedral, being Buthare the chair town of a diocese.

Butare hosts as well the National Museum of Rwanda, a place you will not miss during your visit. After lunch, proceed to Nyungwe.

Nyungwe Forest is probably the best preserved forest in the Central African mountains´ region. It is located in the line dividing the waters between the Congo basin to the west and the basin of the Nile river to the east.

Early breakfast and depart to the Park for chimpanzee trekking.

Nyungwe National Park was established in 2004 and it covers an area of approximately 374 sq miles of tropical forest, bamboo, meadows and swamps. Nyungwe National Park is Eastern Africa´s widest untouched tropical forest. By its height, it is the ideal habitat for chimpanzees and other primates. This beautiful tropical forest is home also of rare flora & fauna not to be seen in other areas of Rwanda, with more than 100 species of orchids and over 270 bird´ species. The park is a paradise for trekking lovers, botanists, bird lovers and for all those who just love nature.

After lunch, visit to a tea plantation.

Overnight on Full Board at NYUNGWE FOREST LODGE.

Early breakfast and trekking in search of colobus monkeys.

After lunch, trek in the awesome canopy.

Overnight on Full Board at NYUNGWE FOREST LODGE.

Breakfast and depart to Ruhengeri.

Ruhengeri is a market-town located in the north-west of Rwanda, near Bulera lake and Volcanoes National Park. The city is the gate to gorilla trekking.

Spanning on a 160sqkm area in the northern part of Ruanda, Volcanoes national park is the oldest national park in Africa. It was initially a small area around Karisimbi, Mikeno and Visoke volcanoes which was gazetted to protect the Mountain gorillas which were facing the threat of extinction as a result of poaching.

In 1967, the American zoologist Dian Fossey who had been doing research on mountain Gorillas in the forests of Congo fled from insecurity and established her research base at a place between Visoke and Karisimbi volcanoes that was yet to be known as Karisoke research center. She spearheaded the conservation campaign of the mountain gorillas and mobilized resources to fight against poaching in this area, a fight she put up until her murder in 1985. She was buried at the research center next to the grave of her favorite gorilla called Digit.

The park continued to suffer at the mercies of poachers though conservation efforts were also under way. In early 1990s, the park became a battle field for the Rwanda’s civil war which paralyzed tourism activities until 1999. In 2005, in a bid to boost conservation and gorilla tours in Volcanoesnational park , Rwanda introduced the annual baby naming ceremony for baby gorillas known as ‘Kwita Iziina’ which has seen great results in as far as gorilla population in volcanoes is concerned.

Overnight on Full Board at VIRUNGA LODGE.

After an early breakfast, you will be transferred we will be transferred to the national park headquarters in Kinigi for being briefed by the park rangers before departing for the hike in search for the Great Mountain Gorillas. The excursion in a thick rainforest and the interaction with the mountain ape, gives a wonderful experience in life. We will have lunch after returning from the hike to the lodge. Free evening.

The mountain gorilla (Gorilla beringei beringei) is one of the two subspecies of the eastern gorilla. There are two populations. One is found in the Virunga volcanic mountains of Central Africa, within three National Parks: Mgahinga, in south-west Uganda; Volcanoes, in north-west Rwanda; and Virunga in the eastern Democratic Republic of Congo (DRC). It is listed as critically endangered by the IUCN. The other is found in Uganda’s Bwindi Impenetrable National Park. Some primatologists consider the Bwindi population in Uganda may be a separate subspecies, though no description has been finalized. As of September 2016, the estimated number of mountain gorillas remaining is about 880.

The mountain gorilla inhabits the Albertine Rift montane cloud forests and of the Virunga Volcanoes, ranging in altitude from 2,200–4,300 metres (7,200–14,100 ft). Most are found on the slopes of three of the dormant volcanoes: Karisimbi, Mikeno, and Visoke. The vegetation is very dense at the bottom of the mountains, becoming more sparse at higher elevations, and the forests where the mountain gorilla lives are often cloudy, misty and cold.

The home range size (the area used by one group of gorillas during one year) is influenced by availability of food sources and usually includes several vegetation zones. George Schaller identified ten distinct zones, including: the bamboo forests at 2,200–2,800 metres (7,200–9,200 ft); the Hagenia forests at 2,800–3,400 metres (9,200–11,200 ft); and the giant senecio zone at 3,400–4,300 metres (11,200–14,100 ft). The mountain gorilla spends most of its time in the Hagenia forests, where galium vines are found year-round. All parts of this vine are consumed: leaves, stems, flowers, and berries. It travels to the bamboo forests during the few months of the year fresh shoots are available, and it climbs into subalpine regions to eat the soft centers of giant senecio trees.

After an incredible time with these fascinating creaturas, return to your hotel fo dinner & overnight at VIRUNGA LODGE.

After breakfast, transfer to Kigali International Airport for your return flight.