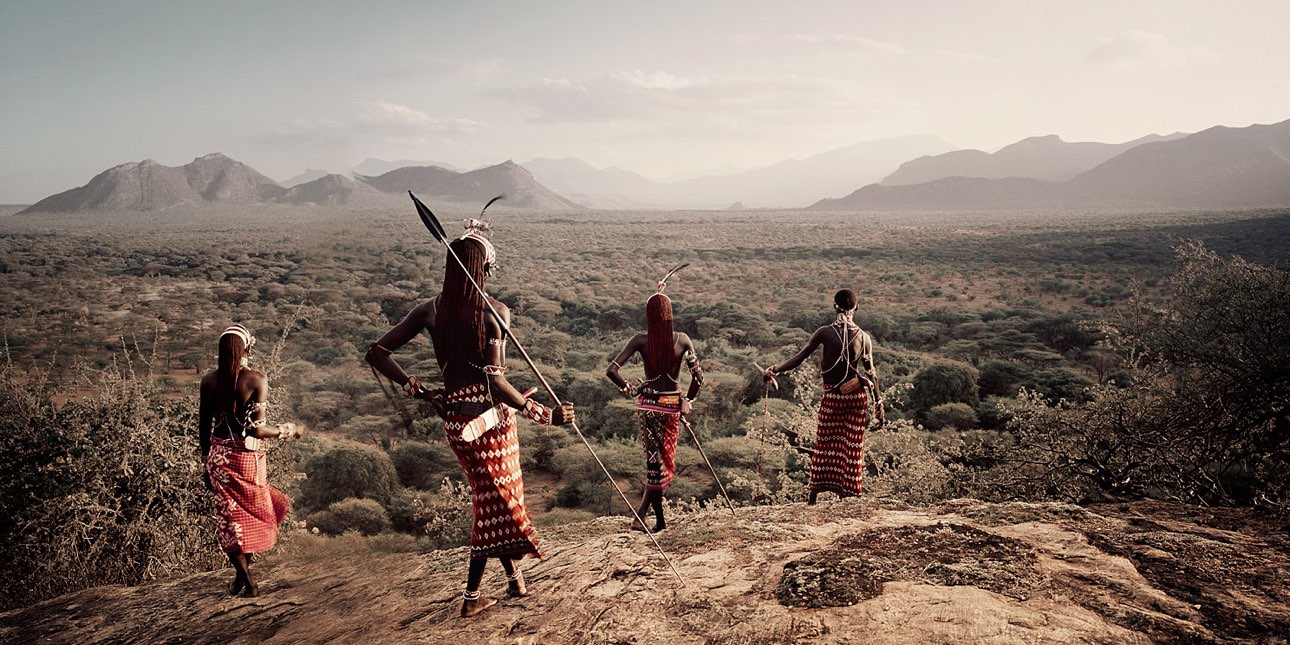 KENYA: CLASSIC SAFARI WITH A TOUCH OF CLASS

This awesome safari combines some of the best parks & reserves of Kenya.

An overview of the regions

Samburu National Game Reserve, meaning Butterfly, with its 225 km2, lies north of the Equator, in an area still known as the Northern Frontier District.

A beautifully dramatic landscape of semi desert, with blue hazy mountains in the distance, gently swaying Doum palm trees, and the even gentler trickling of the Ewaso Nyiro and Isiolo Rivers; wild and untamed, this is one of Kenya’s last true remaining wilderness areas.
The Ewaso Nyiro River is the main source of water in this otherwise harsh and dry country. It runs through the hot sands, a brown-coloured (Ewaso Nyiro) artery of life whose banks are overgrown by thick, riverine vegetation, from the short grasses along the shore to the towering Acacias that grow to over 25m in height.
The snow covered Mount Kenya, which is seen clearly on most days, is the birth place of the river, which runs through the land in a slow sluggish motion, before mysteriously disappearing into the ground in the far off Lorian Swamp, never to be seen again.
Some say it runs underground all the way to the Indian Ocean on Ethiopia’s coast, but then again, perhaps not.
The Samburu people are historically closed to the Maasai. Both came from the region around present day northwest Turkana in the seventeenth century.
Many in the driest areas of their range in the northeast have turned to camel herding as a better insurance against drought than cattle. This land is inhabited by such strange and exotic creatures as the Blue-Legged Somali Ostrich, the enormous Grevy’s Zebra (which is more endangered than the rhino!), graceful, long necked Gerenuk gazelles, the mystical Oryx antelope and the most beautiful of all giraffes- the Reticulated Giraffe.

Lake Nakuru National Park is situated in Central Kenya, 140km north-west of Nairobi, in Nakuru District of the Rift Valley Province. It covers an area of 188 km2. Lake Nakuru is a very shallow strongly alkaline lake 62 km2 in extent. It is set in a picturesque landscape of surrounding woodland and grassland next to Nakuru town.
The lake catchment is bounded by Menengai crater to the north, the Bahati hills to the north east, the lion hill ranges to the east, Eburu crater to the south and the Mau escarpment to the west. Three major rivers, the Njoro, Makalia and Enderit drain into the lake, together with the outflow from several springs along the shore. The lake supports huge numbers of lesser flamingo.

The Maasai Mara Game Reserve is famous for its exceptional population of game and the annual wildebeest migration from July to October – a migration so immense it has to be seen to be believed. The Maasai Mara Game Reserve although not the largest game park in Kenya, is one of the most spectacular and most popular game reserves in Kenya. Rich in game, the rolling grasslands and acacia savannah have frequently been captured on film, with “Out of Africa” being the most famous.
The reserve borders Tanzania and the two countries share the vast Serengeti plains, with wildlife free to roam between Kenya and Tanzania in search of food.
The concentration of game in the Mara during the mass migration is mind blowing, and this is one of the few areas where you are likely to see all of the big five – buffalo, elephant, rhino, lion and leopard. In fact lions are ridiculously common and, you are quite likely to see them feeding on a kill during your visit. Other animals include cheetah, zebra, spotted hyena, black backed jackal, hippo, giraffe, eland and of course wildebeest.
The Mara-Serengeti ecosystem is famous for the annual migration of over one million wildebeest and thousands of zebra and gazelles. The incredible spectacle of them crossing the Mara river into Kenya As the biggest Black Rhino Sanctuary in East Africa,
Ol Pejeta Conservancy is home to 74 Black Rhinos after the single largest rhino translocation ever happens in late July or August. Thousands of animals die in this dramatic crossing and predators and crocodiles have a field day. In October the animals return again to Tanzania. The history of this area can be traced back at least
2,000 years, when Neolithic man discarded pottery and arrow heads in the Lemek valley slightly north of the reserve. The Maasai herdsmen have occupied the area since the 17th century, living in harmony with the wildlife as pastoralists and not hunters. These proud warrior people are still here today and the men often perform an amazing dance in the lodges.

Day 1: Upon your arrival at Jomo Kenyatta International Airport, you will immediately enter the Arrivals Lounge and you will proceed to the immigration counter where you may be asked to present your Yellow Fever vaccination Card. Should you not have your Kenya entrance visa, you may purchase this on arrival at a cost of USD $50 per person payable in cash. Each person will simply be required to provide a passport valid for at least 6 months past your arrival date, fill up an immigration entrance form and the immigration officers will do the rest. On collection of your luggage your Love Live Africa representative will meet you and escort you to your vehicle to transfer you to PALACINA SUITE in Nairobi where you will stay one night on bed & breakfast basis.

Day 2&3: After breakfast, you will start your safari, along the Great Rif Valley towards Samburu National Park. During the journey you will be able to enjoy the forest landscape, till you will arrive to the arid northern province. You will arrive to ELEPHANT BEDROOM CAMP for your lunch. You will stay 2 nights on full board basis and with game drives.

Day 4: Today we leave this arid landscape to travel to Lake Nakuru National Park, crossing the Equator line and inside the Great Rift Valley. The landscape will change dramatically from the Mount Kenya Region alternating with rocky cliffs, stretches of acacia woodland and rocky hillsides covered with Euphorbia forests. You will arrive to Flamingo Hill Camp and lunch will be served. In the afternoon enjoy a game drive in this park. Dinner and overnight at MBWEHA LODGE.

Day 5: After an early breakfast, you will drive towards the Maasai Mara. The long journey will take you through agricultural lands of the Rift Valley and the landscape will then change when you reach the Maasai Mara eco-system. You will view giraffes and zebras long before reaching the reserve and you will arrive for a late lunch at NGENCHE CAMP, where you will stay 2 nights on full board basis.

Day 6&7: Enjoy two full day in the Maasai Mara and choose to do a full day or half day game drive or early morning and afternoon game drives to capture the best light for your photographs. Optional activities are balloon flight with champagne breakfast, visit of a traditional Maasai village and bush sundowner. Full board accommodation at NGENCHE CAMP.

Day 8: After breakfast, you will drive to Nairobi, and after lunch at Karen Blixen Coffee Garden, your vehicle will be at your disposal till the time to be transferred to Jomo Kenyatta International Airport, where your driver guide will bid you KWAHERI (Farewell in Kiswahili).