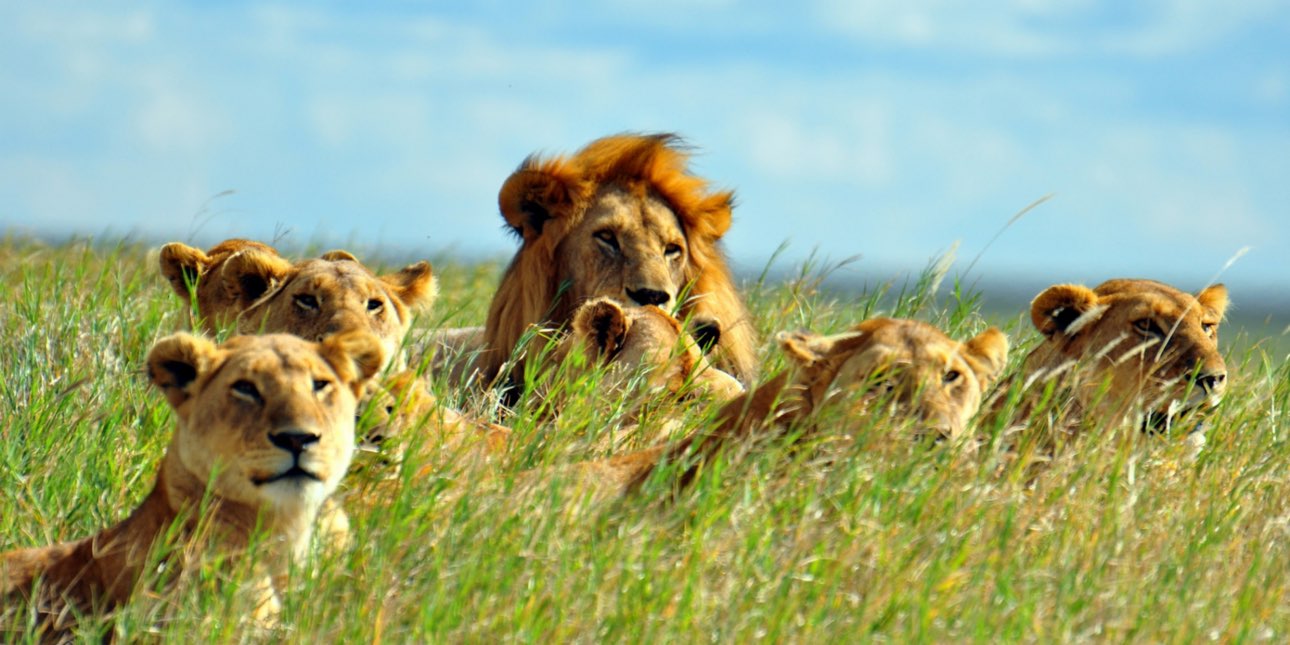 This awesome safari visits four of Tanzania’s most popular parks of the Northern Circuit of Tanzania, which are the most famous & visited of the country. To make it perfect, it finishes in the endless white sandy beaches of Zanzibar.

An overview of the Parks:

Lake Manyara National Park is one of the smallest but most ecologically diverse game reserves in Tanzania. Entering the park the tall trees surround the ground forest. In many ways it resembles a tropical rainforest – with its verdant foliage and variety of bird life – the difference being these trees are supported by a water supply from underneath rather than by abundant rainfall.

Following the formation of the Rift Valley, streams cascaded down the rocky walls and, because there was no outlet, a lake was formed. It was at its largest about a quarter of a million years ago. The average area of the lake is around 390 km2 varying from year to year.

The lake harbors abundant aquatic life ranging from pink flamingoes to elegant pelicans. The hippos are no doubt commandingly noticeable in the inlets of various rivers & rivulets feeding this lake with fresh water.

At the far southern end of the park, are some Hot water springs owing to the vulcanicity which the whole region went through, about a million years ago. Perfectly popular are the tree-climbing lions of this park – they are known to take this position especially during the dry season on the low-lying branches of the dominant umbrella acacias.

Between the Ngorongoro Highlands, Lake Victoria and Tanzania’s northern border with Kenya stretches one of the world’s last great wildlife refuges – the Serengeti.  The name comes from the Maasai “siringet,” meaning “endless plains”. The Serengeti’s 14,763 km2 contains about three million large animals, most taking part in seasonal migrations, unparalleled in nature.

Twice a year, triggered by the rains, 1.4 million wildebeest, 300,000 zebra and 300,000 Thomson’s gazelle gather to undertake the long trek to new grazing lands. The migration of the herbivores roughly defines the boundaries of Serengeti National Park, which is the central zone of the Serengeti ecosystem, an area that also takes in Kenya’s Maasai Mara Game Reserve, the Ngorongoro Conservation Area and the Maswa Game Reserve in the west. Within this 25,900 km2 of varied landscape live thirty-five species of plains game and 500 bird species.

The endless plains of the Serengeti lie 330 km North West of Arusha.

The Ngorongoro Conservation Area covers 8288 km2 and encompasses the volcanic area around the Ngorongoro Crater – including the still active volcano of Oldonyo Lengai and the famous Olduvai Gorge. Its centerpiece, the Ngorongoro Crater, is the largest unbroken caldera in the world and the first sight of it is breathtaking. The floor of the crater is only 100 sq miles but is home to around 30,000 animals with a high concentration of predators.

The crater supports up to 25,000 large mammals. Grazers dominate: zebra, wildebeest – accounting for almost half the animals – gazelle, buffalo, eland, hartebeest and wart hog. Giraffe, for example, stay away because there is insufficient food at tree level; topi because they compete directly with wildebeest. An odd feature of the crater elephants is that they are almost exclusively bulls. Breeding herds – comprising large numbers of females and young with a few attendant older males – are probably unable to find sufficient quality food in the crater.  Ngorongoro has carnivores in quantity, drawn by the large herds of prey animals. It has the densest population of large predators, mainly lion – about 100 – and more than 400 spotted hyena, living in eight clans of up to eighty individuals. Both lions and hyenas will scavenge from each other, depending on weight of numbers and of course, hunger. Most of the bird wildlife in Ngorongoro is seasonal. Also influencing the variety of bird species on display is the ratio of soda water to fresh water – soda water has the largest expanse of water on the crater floor, Lake Magadi. The lake is alkaline due to deposits of volcanic ash thrown out by surrounding volcanoes.

Tarangire National Park lies about 120 kilometers south of Arusha and is one of Africa’s unknown gems. At 2,600km2, the park is hardly the biggest of the Tanzanian parks, but its open plains dotted with thousands of baobabs make for a truly incomparable landscape. The park is also easy to access and has some of the greatest concentrations of game in Tanzania (second only to the Ngorongoro Crater). Another attractive point is that there are not nearly as many tourists as other Tanzanian parks.

Game viewing in Tarangire is largely affected by the presence of water, and during the dry season many animals congregate at the Tarangire River, the park’s only permanent source of water.  Tarangire is also the best place in Tanzania to see large herds of elephant (up to 300 at a time) and buffalo.  In fact, the game numbers overall are staggering: 30,000 zebra, 25,000 wildebeest, 5,000 buffalo, 3,000 elephant, 2,500 Maasai giraffe and over 1,000 fringe-eared oryx (gemsbok). Predators include lion (prone to tree-climbing just like their Lake Manyara cousins), cheetah and leopard.

The park is also known for its great avian diversity, in which it is surpassed only by Lake Manyara. Birders will want to look out for the endemic ashy starling, rufous-tailed weaver and black-collared lovebird.

Day 1: Arrive into Kilimanjaro Airport. After visa & immigration procedures, one of our guides will meet & greet you and and transfer you to Arusha where you will receive an in-depth safari briefing before you depart and start your African Adventure. You will depart Arusha and drive for around 2 hours to reach Lake Manyara National Park. The game drive will take you through the different ecosystems the park has and if you are lucky you will spot the infamous tree climbing lions. After the game drive, ascend the escarpment for dinner and overnight at PLANTATION LODGE

Day 2:  After breakfast at the lodge you will depart for Serengeti National Park. Guests will have a picnic lunch in the Naabi Hill Area so that they can enjoy a long game drive en route in the seemingly endless plains.  Arrive at LEMALA EWANJAN OR NDUTU early in the evening where dinner will be waiting for you at your overnight stay.

Day 3: The Serengeti will always have an unsuspected surprise in stall for you….be it when you are out to check on the migration of the wildebeest or zebra, or in search of the big cats, or even the unnoticed dung beetles whose contribution to this sensitive ecosystem goes unnoticed but is vital.  All meals and overnight at LEMALA EWANJAN OR NDUTU

Day 4:  Before breakfast you will have a final game drive in the Serengeti and after checking out of your hotel you will sadly leave this wonderful area. You will have picnic lunches en route to Ngorongoro Conservation Area.  En route to your lodge at the Crater you may pay a visit to the Oldupai (sometimes pronounced Olduvai) Gorge – deemed as the cradle of humankind (cost not included). Dinner and overnight at GIBBS FARM

Day 5:  After an early breakfast you will descend into the caldera where you will spend half of the day viewing game on the crater floor. Besides the huge black-maned lions, keep your eyes peeled for Rhino and after a final crater tour you will ascend the crater at about lunch time, to have lunch at the lodge.  The rest of the afternoon you have at leisure unless you wish to take any optional activity such as visit a Maasai Village (cost not included). Dinner and overnight at GIBBS FARM

Day 6:  After an early breakfast, you will depart from your lodge and drive down the escarpment, enjoying the magnificent scenery along the way. You will pass various villages en route to Tarangire National Park.  You will have a game drive en route to your lodge for lunch enjoying the sights of the magnificent baobab tress. On arriving at your lodge you will be checked in. At round 15.00 hrs you will depart on an afternoon game drive to enjoy the beautiful scenery this park has to offer.  Dinner and overnight at MARAMBOI TENTED CAMP

Day 7:  After an early breakfast you will head to Arusha for your flight to Zanzibar which takes approximately 1 ½ hours.

On arrival in Zanzibar, immediately upon collection of luggage, outside the Terminal Building, our dedicated representative will meet you.  They will have your name posted on a sign and they will show you to your vehicle so as to transfer you to ZANZIBAR SERENA INN in Stone Town where you are booked on bed and breakfast basis.

Day 8: Today you will depart the city and head to the south east coast of the island.  The transfer by road, which takes nearly 1 hour, will take you through un-spoilt scenery, passing typical villages of this beautiful Spice Island where the way of life has changed little for hundreds of years.  You will stay for 3 nights at BREEZES BEACH CLUB & SPA on half board basis (deluxe room) which is situated on the stunning South East Coast, overlooking the turquoise Indian Ocean and boasts of one of the best and most private tropical beaches the island has to offer.

Day 10: After breakfast you will be transferred to Zanzibar Airport.